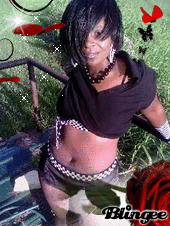 Her name is NaQuila L. Hardy aka Stackz2020 & Female Gotti. A former member of the Young Money posse, who found a new home in Universal Music Group with a new Record Label name Involved Records, who is a subsidiary of the major label.

Her first single is about to be released in August 2010, the name of the song is “People Crying (Colors).” The song received the personal blessing of Ice T, who used a similar hook year ago in the soundtrack song from the movie “Colors.” The song is Gambino Production writing by NaQuila L. Hardy and Frank Paul Jones.

NaQuila and Frank are currently engaged in major negotiations with one of the largest nonprofit organizations in New York City known as SUS acronym for the Services for the Underserved. This organization has major influence in the nonprofit sector and does great work helping people with developmental disabilities, Mental Health problems and people living with AIDS to name a few of their services. There is a possibility that SUS may receive a donation that is a song anticipated to be the International Anthem for AIDS Research, which is also a Gambino Production performed by NaQuila and co-written by Frank Paul Jones & NaQuila L. Hardy.

Frank Paul Jones aka Gambino Productions is a personal friend of some of the high level executives at SUS, to include the CEO Donna Colonna and Senior vice President Priscilla Fuller who was his supervisor when employed at the Central Office of SUS in Manhattan, New York. And the Chief Development Officer David L. Hertz made Frank make a promise before leaving SUS for undisclosed reasons. He said, “Frank promise me someday you will make a donation to SUS.” Well Frank called David and said “I am broke, but I can give you a hot song by new hot artist.” And now it is all agreeing to terms.

Meanwhile, NaQuila is being played at the local clubs in South Central Florida to include the hottest club in Highlands County called the MiXx; where NaQuila has powerful and influential friends. NaQuila L. Hardy is turning heads as “she is to be taken seriously as an artist and is no Nicki Minaj” says the CEO of Involved Records Devon Gaithner. NaQuila has gained the personal attention, respect and blessing of the Gotti Family in the use of the name Female Gotti, unlike Rick Ross who is perpetrating a fraud.

So watch out Nicki Minaj there is a new high speed train traveling out of a small town called Avon Park, Florida that is about to reach out and touch the world. Why? Because the turn of time has come for her to shine!

Posted by NaQuila Hardy at 5:38 PM